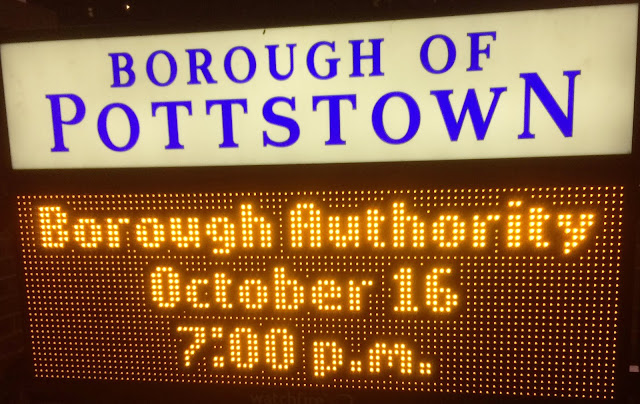 Customers of the Pottstown public water system will shoulder rate increases of about 5 percent each year for the next three years according to borough officials.

With a unanimous vote Tuesday night, the Pottstown Borough Authority Board raised the 2019 quarterly base rate for borough customers by $2, from $41 to $43 for the majority of customers -- about 7,500 accounts.

That represents an increase of 4.87 percent.

Customers in the outlying Montgomery County townships on the system also will see their base rate increase by $2, from $43 to $45 per quarter.

That represents an increase of 4.65 percent and will affect just under 3,700 customers in Lower Pottsgrove, West Pottsgrove and Upper Pottsgrove.

The base rate is the fee you pay for water service no matter how much water you use. An additional usage rate is applied to the readings on water meters which measure how much water is used at a property.

Finance Director Janice Lee said the usage or consumption fee will be raised by 15 cents, an increase of 4.9 percent.

Further, Lee and Budget Analyst Gerald Keszczyk both said the authority will impose identical increases to the water rates, both base and usage, for 2020 and 2021 as well, a motion which was adopted by the authority board at its Sept. 18 meeting.

Over the course of the next three years, the base rate increase represents a 14.6 percent increase for the average Pottstown customer over the current rate and a 14 percent hike for water customers in the three Pottsgroves.

There will also be a 12 cent-per-gallon increase in the bulk water rate, from $3.96 per thousand  gallons to $4.08 -- an increase of 3 percent -- as the result of a second authority board vote.

For the North Coventry Township's water system, which buys its water in bulk from Pottstown, that increase will not go into affect until April as the agreement between the two requires six month's notice of a rate change.

The revenues from the increased rates -- about $94,000 -- will go directly into improving the water system by bolstering the capital fund, said Authority member David Renn.

"All that money goes right back into the ground," he said Monday.

Putting money into the capital budget ahead of projects has eliminated the need for the authority to borrow to pay for needed upgrades and repairs — ultimately a cost savings as interest does not have to be paid out on bonds, but is rather earned on the money being saved.
The authority last raised rates in May of 2017 when it increased the water usage rate by 9.7 percent, from $2.78 to $3.05 per 748 gallons; and the base rate by 17 percent, from $35 to $41 per quarter.

There is no increase in sewer rates planned for 2019.

The water rate increases are part of the $6.8 million water budget and the $1.9 million water capital budget unanimously adopted last month by the borough authority board.

The water budget, as well as the $9.3 million sewer fund; the $4.5 million sewer capital fund and the $611,000 sewer lines fund are all part and parcel of the $49 million budget proposal presented to Pottstown Borough Council earlier this month, which calls for a 12 percent property tax hike.

According to the minutes from the Sept. 18 authority meeting, the water and sewer budget includes the addition "of an in-house utilities inspector position, with a civil engineering degree, as recommended by the Financial Sustainability Oversight Committee."

Water Rate Hikes Coming for Next 3 Years
Posted by Evan Brandt at 12:00 AM