Blogger's Note: The following was submitted by the Pottstown Parks and Recreation Department.

The Borough of Pottstown is proud to announce a public event recognizing local Olympian Payton Ridenour to be held at Trilogy BMX Park, located in Memorial Park, beginning at 6:30 p.m. tonight.
Payton Ridenour, age 19 of South Pottstown, has been named to the U.S.A. Olympic Team as a competitor in the BMX Racing event taking place at the 2021 Summer Olympics in Tokyo, Japan.

As a resident of the Greater Pottstown Area, Payton has been a rider at the Trilogy BMX Park since its founding in 2004. Since the age of 7, Payton has been racing at Trilogy BMX, and Pottstown is proud to welcome her home for a brief visit before she leaves to compete in the Tokyo Games.

From her formative years riding in Trilogy BMX Park, she has developed a love of the sport, and in being named to the 2021 Olympic team, she has excelled to the highest level of accomplishment in her field to date.

As an amateur racer, she was a 7-time BMX racing national champion and the 2019 Red Bull UCI Pumptrack World Champion.
In 2021 at the age of 19, Payton turned pro and represented Team USA at World Cup events held in Italy and Colombia where she made three of four finals. During the second day of racing in Colombia, Payton had her best finish (2 nd ) which earned her the final spot on Team USA for the Tokyo Olympics. 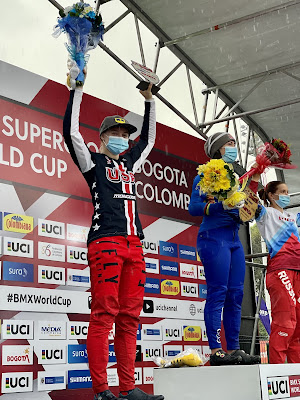 Payton is beyond excited to be competing in her first Olympic Games, but she hopes also to attend Paris 2024 and Los Angeles 2028. After Tokyo there won’t be much downtime since Payton will be traveling to the Netherlands to compete for Team USA in the World Championships in August and defending her pumptrack world title in Portugal in October.

When not competing, Payton usually spends her days working hard on and off the bike between gym, sprints and going to the track. When she isn’t training, she is either furthering her education toward a college degree or spending time with friends and family. In 2020, during the pandemic,

Payton wrote a children’s alphabet book with a BMX-racing theme, A to Z: BMX Style. She successfully completed a Kickstarter campaign that covered the costs of illustrations and printing.
With this book, Payton would like to introduce kids to bikes as well as get them interested in riding and reading. The book is available at thenuthouse.bigcartel.com.

At the July 19 event in Memorial Park, Payton will be meeting fans and signing autographs and accepting all well-wishes before departing for Tokyo the following day.
We invite everyone to come and make her feel appreciated and let her know that the entire region is behind her as she travels the world to proudly represent her country in the most important sporting and cultural event of the year.

The Tokyo Olympic Games will be held from July 23 to Aug. 8. The BMX racing event will be held July 29 and July 30 at Ariake Urban Sports Park.
Posted by Evan Brandt at 2:09 AM