News came Saturday that Hansjörg Wyss, the mysterious Swiss billionaire who had expressed interest in joining the effort to buy the Tribune newspaper chain to keep it our of the clutches of the vulture Alden Global Capital hedge fund, has pulled out.

Wyss had joined Maryland billionaire Stewart Bainum in his effort to buy the chain by offering a better price than Alden, now known across the nation as "the destroyer of newspapers."

Anyone who has watched what Alden has done to The Mercury, knows what that looks like.

The news is a blow to those who have been desperately working to keep the chain from this savage  fate. But it also shows the downside of depending on super rich people to save local journalism.

Don't get me wrong, I'm as pleased as anybody that Bainum is trying to save Tribune. But let's all acknowledge that any solution to the long-simmering problems faced by local news that depends on making rich folks happy will always be subject to what makes them happy.

In Wyss's case, according to a report in The New York Times, he had sought to transform the Chicago Tribune into a national newspaper on par with the Times and Washington Post, and his interest waned when a look at the books indicated that would likely be more expensive than even a billionaire was willing to stomach.

Me? I say what's wrong with saving The Chicago Tribune (and The Morning Call in Allentown and the dozens of other great papers Tribune owns) to make it a better paper for the nation's third largest city?

That seems as noble as cause, perhaps more so, than stroking your ego by saying you "made the Tribune a national paper." But maybe that's why I'm not a billionaire. I don't think like one, apparently.

I'm just a guy working every day in his attic to bring the Pottstown area as much local news as I can gather in a 10-hour day.

I suspect it is this singular image, magnified by Dan Barry's luminous profile in The New York Times last July, which has made me the go-to guy for explaining to people why they don't want Alden to buy their local paper.

Barry told me "like it or not, you're now the poster boy for what is happening to local news." 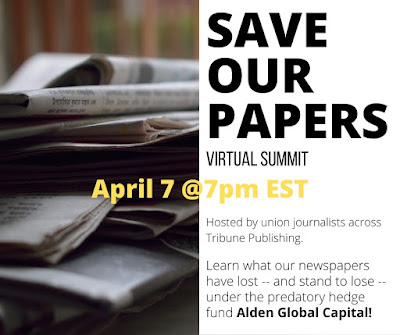 I was tapped once again to dance my cautionary tale of Alden ownership for the April 7 "Save Our Papers Virtual Summit."

Organized through The Newspaper Guild, of which I have been a proud member since 1997, the idea is to reach out to the communities Tribune serves and get them involved in the conversation (and the fight).

In truth, the damage Alden wreaks on newsrooms is becoming so evident that I'm hardly needed anymore.

On April 12, the journalism-focused Poynter Institute took a look at what has happened to Tribune since Alden acquired 32 percent share of Tribune in 2019.

The Poynter report is based on the April 7 summit, the video from which, you've no doubt noticed, is posted at the top of this blog post.

That's what it looks like when Alden owns only part of the company.

Here at The Mercury, which Alden has owned completely for years, the decline has been slower but more severe.

When I started in the landmark building at 24 N. Hanover St., there were, by contract, 15 Guild reporters (sports and news).

There are now three-and-a-half dedicated to our readership alone. And that landmark building has been sold to become a "boutique hotel" and whiskey bar.

For the purposes of apples-to-apples with the above list, that's a 76.6% cut to the newsroom.

To be clear, these reductions did not occur entirely under Alden, but began under its predecessors -- Journal-Register, which went bankrupt and reemerged as Digital First, which then merged with MediaNews Group, which was subsequently snapped up by Alden, which feeds on "distressed properties," like a leach feeds a farm animal drowning in a pond; sapping its strength as it struggles to survive.

Which is not to say, left to its druthers, that Alden would not have cut so much. One look at the blood-letting when Alden bought up The Reading Eagle -- 81 jobs slashed -- tells you everything you need to know about the hedge fund's one-play playbook.

You can learn everything you ever wanted to know about that playbook; how Alden siphons off profits from papers for other questionable ventures; how it hides its profits in tax shelters; how its investors are off-shore entities;  how it destroys other companies and jobs and how what it is doing threatens democracy at -- https://dfmworkers.org/ -- the extensive website set up by the News Guild.

Most of that research is compiled and written by the indefatigable Julie Reynolds, an investigative reporter from California who lived with Alden's ownership for seven years before getting fed up and turning the tables by investigating the company for the Guild.

America needs local news as a bulwark against the forces now trying to erode democracy. 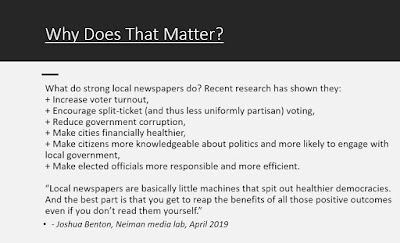 This weekend is a perfect example.

I am putting together a rudimentary preview of the coming primary elections. There are 12 contested primaries with 64 candidates to keep track of in The Mercury coverage.

And that's just for school boards alone. I haven't even gotten to the borough councils or township supervisors yet.

That work used to be spread among several reporters. Now it's on one.

I say this not to make you feel sorry for me, although, by all means, feel free, but to make the point that this is not an optimal way to keep citizens informed about their local elected officials in "the world's greatest democracy."

And just like democracy requires the participation of informed citizens, so too does supporting local news.

Here are just some of the ways you can help:

But ultimately, although Alden is the where the battle line is right now, the war against misinformation; the effort to keep local government transparent; the drive to ensure those whose whose voices are too often muffled get heard, that is a nationwide need.

It's a nationwide need satisfied, if things are working right, by thousands of local newspapers and news sites across the country.

Since 2004, the United States has lost more than 2,000 local papers and hundreds more went under during the pandemic.

At the end of 2019, more than 200 of the nation's 3,143 counties had no local newspaper, or no alternative source of credible information on crucial issues. They are, in the words of University North Carolina researcher Peggy Abernathy, "news deserts."

The discussion now happening here and across the country -- brought to crisis point by companies like Alden Global Capital -- is how do we make local news sustainable and vibrant again?

The old model doesn't run as well as it used to, thanks to multiple forces -- the Internet, Craig's List, Google, Facebook,  corporations, vulture capital.

It's time to find a new model, one that runs on sustainable fuel to take us into the future.

There are any number of models being explored and tested across the country -- web-based, non-profit, podcasts, citizen journalists.

My suspicion is that like the way that local news is particular to its locality -- what works at one paper doesn't always work at another -- that the solutions will be decidedly local.

Here's hoping, for demcracy's sake, we all find them before it's too late.