As debate begins over Gov. Tom Wolf's budget, which includes a massive infusion of funding for public schools, advocates for fair school funding are gearing up their efforts to build support, seeing this perhaps as their best chance to gain ground on the issue.

An advocacy group named PA Schools Work held an on-line tutorial Tuesday on the issue, and how it would be affected by Wolf's budget plan. 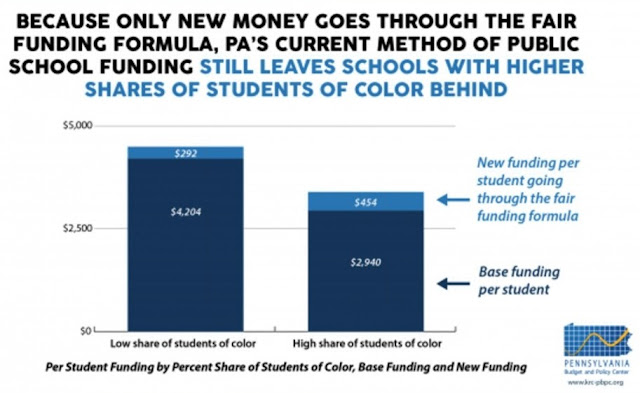 To remedy that, Harrisburg adopted a "fair-funding formula" a few years back aimed at leveling the educational playing field based on things like community poverty and the number of English-language learners in a given district.

But that act of fairness is undermined annually by the fact that the formula only applies to a small portion of the state's education funding. This year, it's 11 percent.

Another arcane relic of legislative action is something called "hold harmless," which means no district, even if it is losing population, will ever get less state funding than the year before.

We wrote about that in Sunday's Mercury.

As Donna Cooper, the executive director of Public Citizens for Children and Youth put it Tuesday, "$5.5 billion in state school funding is based on school enrollment in 1992."

The third spoke in this spinning wheel of inequity is special education, costs for which have skyrocketed in recent years as we learn more about how the brain works and ways to help those with learning disabilities.

And by law, federal law, a school district cannot chose to forgo spending money on special education needs once they have been identified.

What hasn't sky-rocketed is state or federal funding to pay for these mandated costs. So, once again, those costs have to borne on the backs of local taxpayers.

"When the state fails to do its job, the burden falls on the local taxpayers," Cooper said.

In an attempt to keep those factors in check, and local taxes at something resembling a sustainable level, poor districts have to cut back.

"What the legislature is doing is forcing the tax increases down the food chain to the local school districts," said Susan Spicka, a former school board member and now executive director of Education Voters of PA.

"Every year, the legislature puts a little more money in the education budget, pats themselves on the back for passing a budget with no tax hike, goes home for the summer and comes back next year to find the problem is even worse," Spicka said.

All of which brings us to Wolf's budget. 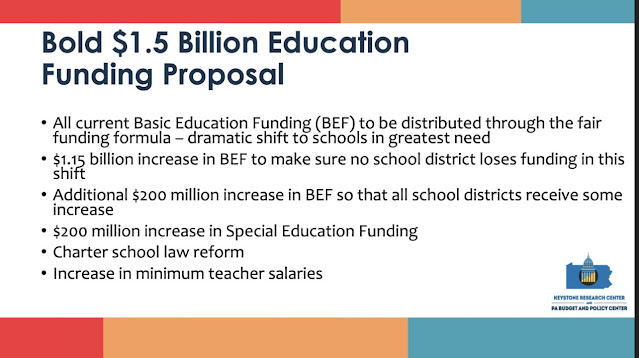 Perhaps the most important element of his budget is the simplest -- use the fair funding funding formula to distribute all of Pennsylvania's basic education subsidy. For Pottstown this would man an additional $13 million that would not only help provide students with resources similar to the surrounding wealth school districts, it could also help to actually reduce -- that's right I said REDUCE -- property taxes.

But school funding that would actually take money away from districts which although they are losing population, are by now means wealthy.

"Those districts would see a dramatic cut, and would have to raise property taxes to make it back, but don't have the property values to support an increase," Cooper said.

So Wolf's budget proposes an additional $1.15 billion to increase the basic education subsidy to ensure no district loses money as well as $200 million more "so that all districts receive some increase," Cooper explained.

The short answer is, those who can afford it.

Republican politicians, which includes our own state Sen. Bob Mensch, R-24th Dist., are using the talking points that its "a tax hike on working families."

What it is, according to Cooper, is a tax hike on wealthier families

Wolf's budget also proposes charter school reform, specifically tuition reform by which all cyber charter schools would be paid the same, that would save about $260 million.

Pennsylvania's personal income tax rate of 3.07 percent is the lowest in the country. Increasing it to 4.49 percent would make it still one of the nation's lowest, according to Cooper.

But what those using the "tax hike" scare tactic don't tell you is currently, low-income tax payers have their Personal Income Tax payment forgiven. Wolf's proposal would raise the threshold of forgiveness, meaning 67 percent of Pennsylvanian's would see either a decrease, or no change from what they pay now.

Those above the threshold, which is graduated depending on how many dependents they have, would be the ones who pay the increased tax.

"It's not asking that much of moderate and high income families to remedy an historic inequity in the way we fund out schools," Cooper said.

"We have seen such gross disparities and how students have been abandoned," said Spicka. "We need to fix the system now."

Otherwise, she said, the kids who are in school now will not be ready for the work force of 10 years from now, and will not be able to pay the taxes, the Social Security, and the other things that will make Pennsylvania, which has an aging population, sustainable into the future.