If you like to watch people argue, you should really check out a meeting of the Phoenixville School Board.

Anyway, because I can't cover more than two meetings in a night (which I did Monday night) I frequently miss Phoenixville School Board meetings.

And apparently, I missed the one on Aug. 24, which is when board member Lori Broker resigned.

It was not apparent to me until the board began discussing the interviews for her replacement, which will take place online on Wednesday, Sept. 16, starting at 6:45 p.m.

My thanks to Sandra Claus, the communications person for the district, who responded to my email very quickly, letting me know who has resigned and when.

Claus wrote that Broker gave "family related" as the reason for her departure.

It was not immediately clear how the school board went about seeking candidates for Broker's seat.

However, the vote on which candidate is chosen will not occur until the following week, said Superintendent Alan Fegley.

Broker was elected in 2017, along with Blake Emmanuel, now school board president, Jeesly Soto and Christopher Caltagirone.

In other matters, the board also discussed East Pikeland township's request for the extension of a LERTA, stands for Local Economic Revitalization Tax Assistance. It is a kind of tax abatement program designed to incentivize development of blighted properties.

The current one has been around for 10 years and the township was asking the board to endorse another 10 years in the hopes of getting properties like the former Waterworld and The Fisherman restaurant, both on route 724, redeveloped.

But the board seems disinclined to support another 10 years, although they did show an interest in discussing specific incentives for specific properties.

And finally, of the portion of the meeting I saw, the board also discussed, what else? the state of the COVID-19 pandemic and how the latest figures will impact decisions about re-opening schools for in-person learning. 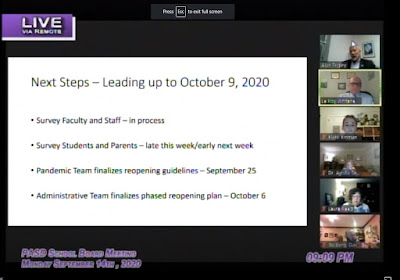 Fegley told the board that although earlier numbers were encouraging, the latest trend is "headed in the wrong direction."

That means more people who live in the district are testing positive for the virus, not less.

There were three people testing positive in the week that started Aug. 8. But 16 people tested positive between Sept. 5 and Sept. 11.

Although board member David Golberg tried to  advance to next week discussion of the parameters by which the board will decide when and if to re-open, the majority shot him down.

School Board President Blake Emmanuel said the district's pandemic response team will provide a report the week of Sept. 21 and a decision and vote by the board is scheduled for Oct. 9.

It was made clear that although the administration is following closely the guidelines provided by the Chester County Health Department, the decision on whether or not to re-open in any form rests solely with the school board.

In the meantime, the district will issue another survey, one of faculty and staff; and the other of parents and students, although this one will not be anonymous.

The results will be used to get a sense of how many students would return to in-person learning should the board decide to allow it.