More than 700 parents got a run-through of Pottsgrove School District's two-pronged re-opening plan in a well-paced online presentation Wednesday that lasted for more than two hours.
Here is the video of the presentation if you missed it:
The 55-page plan gives parents two choices for the coming school year.
Either their children can stay home and be taught on what district officials said is a vastly improved virtual online program, or they can send them to school two days a week as part of the district's "hybrid program."
Under the 55-page plan rolled out by district officials, and available online here, students would come to school either Monday and Tuesday, or Thursday and Friday, with Wednesday being an online day for all students.
By dividing the students into two rotating groups, the population in the buildings will be much smaller 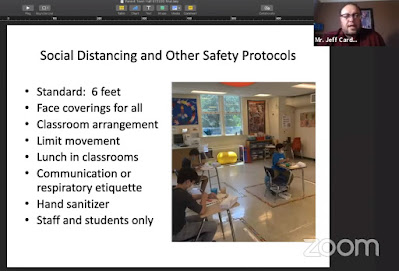 and make it easier for the district to follow social distancing guidelines, said Superintendent William Shirk.
"As looked at our physical plant, we realized we could not follow the social distancing guidelines with everyone in school. So we returned to the hybrid program," said Shirk.
Classroom student populations could, as a result, be reduced to between nine and 12 students, said Shirk.
"Our goal is to minimize student movement as much as possible," said curriculum director Daniel Vorhis.
All students and staff would have to wear face coverings, which could be either a mask or face shield, however those who can provide documentation of a medial reason to by-pass this requirement will be allowed to do so, said pupil services director Kathryn Pacitto. 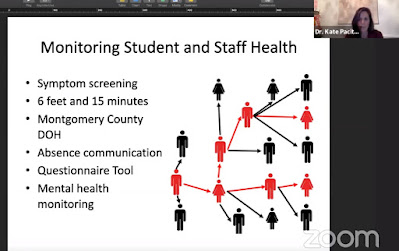 For those choosing the hybrid model, the school district would divided up into quadrants so that students in the same family, and same neighborhood, would attend school on the same days.
This would also make planning bus routes easier. As it is, following the recommended six-foot separation for social distancing would mean a 72-passenger bus could only carry eight to 10 students, said business manager David Nester.
Also helping to reduce the bus population would be the number of students choosing the Virtual Academy model. 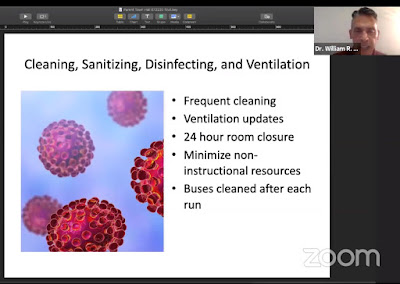 All total, the district expects to use the full bus fleet to transport roughly 50 percent of the student population.
Facilities director Jeffrey Cardwell  outlined the cleaning and sanitizing plan for minimizing the coronavirus risk in the school buildings.
It will include "foggers" and "electrostatic sprayers"  as well as a team of custodians who will clean the school overnight, and another that will continually clean "high-touch" surfaces and bathrooms.
Under the plan, parents  be asked to screen their children every morning for symptoms, as will staff. There will be a room set aside for those who fall sick during the day until they can be picked up.
Anyone who has fallen sick cannot return to a school building until they have been "fever free for three days" as well as symptom-free for at least 10 days since onset of symptoms, said Pacitto. Those who have been exposed, even if they don't test positive, must remain home for 14 days.
The staff did its best to answer the many questions raised during the presentation and Shirk emphasized 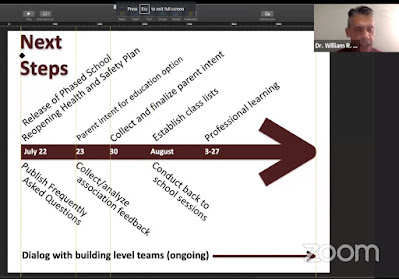 that all plans can change with the shifting health circumstances and changing government guidance that comes in its wake.
"This has been weighing on everyone's mind, and we've put a lot of thought into this," said School Board president Robert Lindgren.
"Our mission is still to provide an education to our children. That is still what we do and we're going to do that," said Lindgren. "What that education looks like for each family is going to be different."
The school board has tentatively set next Thursday, July 30, as the date for a special meeting to adopt the plan. That is also the date by which parents have been asked by the district to choose an option for their student(s).
Click here to see the Tweets from the meeting.
Posted by Evan Brandt at 12:00 AM