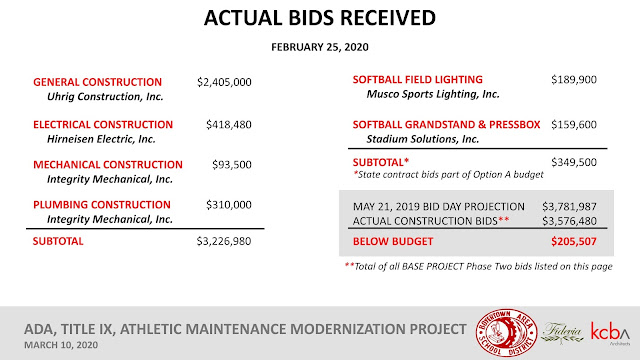 Despite bids coming in under projections, the Boyertown School Board voted unanimously Tuesday to further reduce the cost of its $6.7 million two-year athletic facilities project by removing a new maintenance building from the project before accepting the bids.

The bids for the second phase of the project, which include a softball stadium, lighting and press box, along with new locker and team rooms, came in at $3,576,480, which is more than $200,000 less than was budgeted.

Chief financial Officer Carol Pitts told the board that due to the impact the coronavirus pandemic will have on district finances, that the board should consider reducing the size, and thus the cost, of the project. 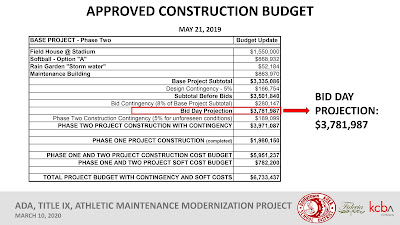 "It hurts for me to say this, because we want a safe working environment for all our employees, but in these extraordinary times, we need flexibility," said Pitts.

Removing the maintenance building from the project, which was one of the deducts envisioned in the bidding documents, will reduce the cost by about $822,000, she said.

She said after consulting with legal counsel, it was determined that the unspent money could be used to help pay the district's debt service, thus freeing up other operational funds to be applied to other deficits anticipated in the budget that ends June 30, and the new one the board will have to adopt.

The first phase of the project included the construction of a replacement for the high school's Memorial Stadium, which is already complete.

Board member Jill Dennin said although she has been strongly in favor of the maintenance building being part of the project, but she agreed that the COVID-19-driven condition of the district's finances necessitates "a little breathing room. No one knows what future revenues are going to look like," she said.

Board member Ruth Dierolf said "I want to thank everyone for reconsidering this. I made this point a month ago and no- one agreed with me."

"I was ready to include the maintenance building, but we're in some heavy seas," said board member Brian Hemingway.


The board also acted unanimously to move forward with a bond re-financing that will save a minimum of $900,000 last night.

Following the recommendation made by the board's finance committee at its April 14 meeting, the board voted to move forward with re-financing the district's series of 2014 and 2015 general obligation bonds.

The minimum net savings for the move to be ultimately authorized was listed as $900,000.
Posted by Evan Brandt at 12:00 AM