Blogger's Note: The following was provided by the Pottstown School District.

Students at Pottstown High School continue their support of children suffering from cancer.

Their most recent fundraising efforts were part of the Mini-Thon student project associated with The Four Diamonds Foundation to battle childhood cancer.

The PHS Powder Puff Flag Football Bowl saw all female teams representing each of the grade levels competing in a winner take all night of football.

Members of the Trojan football team served as coaches and an all male squad of cheerleaders guided by the Trojan Cheerleading squad were on hand to entertain the spectators.

In the championship game the Junior class team, All The Smoke,won in a hard played game over the Sophomore, Blue Diamonds team.

More than $2,000 was raised as part of the school's overall goal of $10,000 which student organizers Emily Weber and Alex Olvera hope to achieve during the Mini-Thon event held at the high school on March 13.

Share the news, that Pottstown students regularly demonstrate their civic responsibility and compassion. 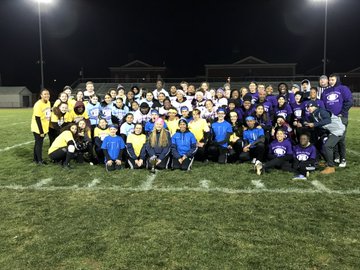