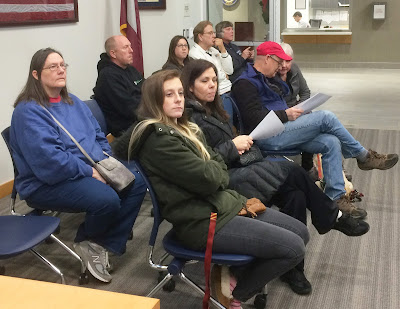 Roughly 75 people packed into the township meeting room Tuesday night to hear and for the most part oppose two proposed commercial developments that neighbors felt would be too close to their homes.

The first proposal involves 28 acres at the corner of Buckwalter Road and township Line Road, just off the Royersford interchange for Route 422.

Developers want to build a 62,800 square-foot Restaurant Depot on 15 acres there.

The second controversial project has been in the works for some time, involves a zoning change brought about by a township mistake.

Originally, residential units were proposed for the 10 acres of land at 181 Limerick Center Road, it was discovered that no legal township record showed that the zoning on the map, as residential with a small commercial portion, existed.

Now, a truck servicing and cargo container manufacturing facility proposed for the site has the neighbors up in arms.

And when they weren't fielding comments from residents, the supervisors manager managed to adopt a $28.5 million budget for 2019 that does not raise taxes.


With few exceptions, the primary objections residents raised to this project have to do with traffic volume and safety.

The volume of traffic on Township Line Road is very heavy, particularly so close to the Route 422 interchange and the shopping center there.

And those who already live there know the perils of navigating the intersection with Buckwalter Road.

"My kids call it 'the intersection of death" said resident Dave Edwards.

More trucks supplying and being supplied by the Restaurant Depot being interjected into the intersection "will create chaos" Edwards told the supervisors.

The developer has already agreed to add a left-turn lane on Buckwalter Road to make it easier for trucks to get back to Route 422 via Township Line Road.

But the residents say it's not enough.

Ironically, the developer, the residents and township officials all agree that what's needed it s left-turn signal at the traffic light that's already there.

Unfortunately, PennDOT does not.

Ron Lewis, speaking for property owner Larry Cohen, said he and township officials had met with PennDOT to ask for the signal. But PennDOT turned them down, saying it did not want to cause more traffic back-ups on Township Line Road by extending the time cars are stopped at the light, Lewis said.

This is despite the fact that, much to the amazement of several speakers, no one had been required to, or bothered to, gather the statistics on the number of accidents that have occurred at that intersection over the years.

"In this case, PennDOT is the villain," said Supervisor Patrick Morroney.

Supervisors Chairwoman Elaine DeWan told the crowd that the plan complies with township ordinances and the supervisors have to treat property owners equally under the law.

The supervisors voted unanimously to instruct solicitor Joseph McGrory Jr. to prepare a resolution for preliminary site plan approval on which they will vote at their next meeting in January.


The supervisors ultimately took the same vote on the other controversial development on the table Tuesday night, to instruct McGrory to prepare a resolution on preliminary site plan approval on which they will vote at the next meeting.

But that vote did not come without more than an hour of discussion and objections from residents of the housing subdivisions which surround the parcel.

"It's like trying to put a square peg in a round hole to put manufacturing in a residential area," said Doug Clouding.

Tom Perkins, owner of TP Trailers and Truck Equipment, owns the parcel with his sister and has variously tried to develop it with 50 townhomes, which was rejected by the township, as well as a business exactly like the one on Ridge Pike, which was also rejected, Supervisor Ken Sperring Jr. said in July when residents objected as well.

In the wake of that wave of opposition, Perkins' attorney, Mark Kaplin, said the developers decided to submit a plan that requires no variances or waivers and meets the code in every way.

Concerns were raised about stormwater run-off, and any pollutants a manufacturing and truck repair facility might carry off site.

Township Engineer Khaled Hassan said there are many state and federal rules governing clean water issues and that the township would be inspecting the facility and testing the water there regularly.

But probably the biggest issue raised by the residents were safety and visual concerns posed by the fact that the facility will construct metal shipping containers and may stack them as many as three high, which would not violate the township zoning code that limits the height of structures to 35 feet.

"I just don't want to see the containers, it's an eyesore," said resident Gianfranco Cierri.

Kaplin attempted to get first the neighbors and ultimately the township to agree to support Perkins' desire to get a variance from the township zoning board to allow sales to occur at the proposed site, as they do now on his business at 703 W. Ridge Pike.

If granted, it would "free up space" at the existing facility and thus make it no longer necessary to store the containers at the Limerick Center Road site.

Resident Dan Walker, who, with his wife Amy, had spearheaded much of the opposition to the plan, characterized that offer as "a threat."

He and several other residents called upon the supervisors to impose a condition on the site plan approval prohibiting the stacking of containers, something Kaplin said the township could not legally do and which would result in a court appeal and a loss for the township.

After more than an hour of discussion, DeWan called a "bathroom break" and, as McGrory revealed subsequently, he met with the supervisors "in groups of two," so as to avoid violating the state's open meetings law, and attempted to get them to agree to a compromise.

However, he was unable to get the supervisors to agree, he said.

McGrory then attempted to get Perkins and Kaplin to agree to limit the stacking of containers to two containers and, while he met with them to do that, the supervisors got on with the rest of the meeting, adopting the 2019 budget in
the interim.

When McGrory returned, he announced he could not get Kaplin and Perkins to agree to his terms, however Kaplin offered an alternative -- that the supervisors pass a resolution requiring that Perkins seek a variance from the zoning hearing board to allow sales at the Limerick Center Road site and, if successful, to not store any containers there at all.

But the supervisors rejected that idea, at least initially, because, as Shuler put it, "we have no control over what the zoning hearing board will do."

Shuler, who noted that it was already 10:30 p.m., then moved that the supervisors do what they had always intended to do, vote to instruct McGrory to draft a resolution regarding preliminary site plan approval for the project to be voted on at the next meeting.

After the meeting adjourned, McGrory said had may draft more than one resolution for the consideration by the supervisors.

And with that patient reader, I leave you with the Tweets from the meeting. It's 1:30 a.m and this local reporter is putting the head to bed.

Residential Versus Commercial
Posted by Evan Brandt at 12:00 AM