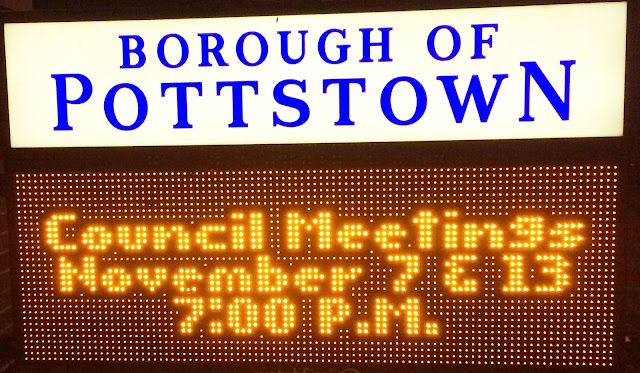 One might think that with a 12 percent tax hike looming, and a consultant trying to find ways to save money and cut such tax hikes, that budget talks on borough council would be long, deep and detailed.

One would be wrong.

One month away from making the final decisions on a $48.9 million 2019 budget that calls for an 11.97 percent tax hike; and six days away from facing a vote to advertise it as is, council did exactly nothing at its Wednesday night work session.

Another factor weighing down the budget, he said, is the $1.1 million hike in pension costs revealed in September. A recent meeting with the pension board revealed that such increases will only keep coming.

It was then that Borough Council President Dan Weand offered this nugget of wisdom: "The actuary said its because health care is too good and our retirees are living longer."

That was all the comment council had on the looming tax hike.

Here are some things not shared with the public as part of the rationale for the second 12 percent tax hike in two years.

Retirees excellent health is due, in part, to an extremely generous health care package for retired police officers

According to the current contract, police retirees carry their borough health care coverage for them and their families into retirement with them, with a $100 deductible and a 20 percent co-pay.

They must exit the health care plan when they become eligible for coverage another say, say through a spouse's plan, but can return if they lose that eligibility.

But those hired after 2013 do not get that guarantee of coverage.

Five years ago, the borough began setting aside money to pay for retiree health care. While a $1 million pension liability might seem intimidating, the borough faced a $27 million liability on 2013, when it began making an annual $250,000 contribution to try to address that liability.

Since then, the borough has paid into that fund four of the five past years, skipping 2017, according to Finance Director Janice Lee. With the 2018 payment, that fund will have $1,250,000 according to Lee.

That health care liability was one of the issues mentioned in the 141-page Early Intervention Program report issued by Management Partners in 2008 as one of the things necessary to straighten out borough finances.

The report was cited as the reason for the lay-off of 13 employees in late 2008 and the 10 percent property tax hike which accompanied it.

Council will vote Tuesday on whether to advertise the budget, to which they have not suggested a single change. Once that happens, explained Borough Solicitor Charles D. Garner Jr., council can lower the tax rate, but not increase it, before final adoption in the end of December.

So we've got that going for us Pottstown.

On a similar subject, Econsult, the consultant hired as part of the state's Early Intervention Program to help make Pottstown's finances sustainable, will deliver the first part of its report later in the month, according to Councilman Joseph Kirkland, who heads up the Ad Hoc financial Sustainability Oversight Committee.

Among the suggestions Kirkland's committee has made for saving money is closing the service window where Pottstown residents pay their water bills in person.

Resident Kenneth Yerger showed up Wednesday night to question the wisdom of that. "Not everyone has a checking account or credit card," he said.

If the window is still going to be open for getting other permits, how much savings is really generated by refusing to accept payments for water bills he asked.

Weand assured him it would save money.

Speaking of permits, changes planned for the use of the six under-used borough parking lots, and the ability to buy permits to use them, are coming.

Borough Manager Justin Keller said those lots are rarely full and the process for getting permits is arcane to say the least.

The agreement recently made with the ParkMobile APP will make it easier for anyone to buy a permit for any of the lots.

However, under the changes being recommended, you will no longer be able to reserve a specific space.

Tuesday's vote will authorize staff to begin putting together a new parking ordinance to codify the changes.

In other news, Peggy Lee Clark said opportunity zones created by the new tax legislation signed by President Trump may come into play in efforts to attract a start up company to the vacant third floor of 159 E. High St., at the corner with N. Hanover Street, where Cedarville Engineering recently occupied the top floors.

Lee-Clark is the executive director of the Pottstown Area Industrial Development, the borough's primary economic development agency, which may soon draw up an agreement with the Pottstown Downtown Improvement District Authority, or PDIDA.

The legislation creating PDIDA expires at the end of the year and, Garner explained, council must vote Tuesday on whether to re-authorize it. As the name suggests, PDIDA was created in the 1980s as a way to try to improve conditions for business in the downtown area along High Street, from York and Evans street.

It's most visible efforts come at Christmas time for the downtown events there.

Board member Bill Robertson said a new strategic plan for PDIDA is currently being drawn up.

If it is not re-authorized, it could be hard to re-create, Garner said, because it requires the approval of a majority of the downtown property owners who pay the additional tax to support it.

Speaking of PDIDA, the board currently has two vacancies and three people -- Steve Everett, Jennifer Keller Ryan and Chanel Erasmus -- have applied to fill the seats.