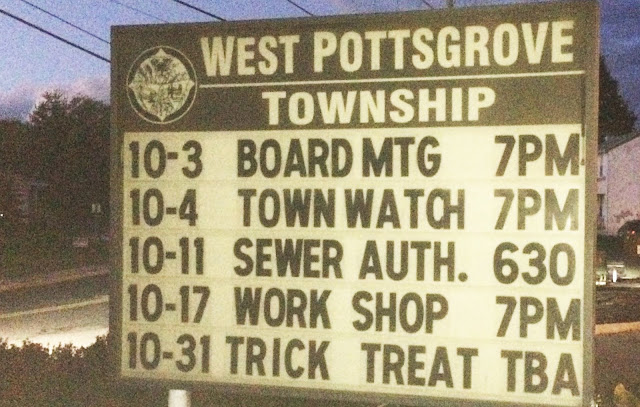 Most of the news from Wednesday night's 20-minute commissioners meeting had to do with Murgia Park, the slowly developing piece of paradise along Manatawny Creek.

Township Manager Craig Lloyd said the Stowe Lions Club recently planted 20 trees along the bank of the stream. The trees were provided by Montgomery County and more will be planted in the spring, he said.

The township is also pursuing a grant to help pay to put a pavilion at the park.

Regional Recreation Coordinator Michael Lane said he is nearly finished with the application and said by pairing the grant application with the park's connection to the trail planned to run along the Manatawny from Pottstown's Memorial Park and up into Upper Pottsgrove will help its chances.

Lloyd said the township crew will excavate the site and pour the concrete to cut the costs.

Lane said the township won't find out about the grant until January at the earliest, so it will be some months before the project can get underway.

This spring, a $168,658 improvement project was completed. The most visible feature of the improvement is a new bridge over Goose Run, which separates the two halves of the park, which lies along Manatawny Creek.

The improvements also include an accessible pathway and a fishing platform.
In other news, Lloyd reported that a two-phase sewer project on School Lane, between Race and Vine streets, will get underway soon. The first phase will be mostly storm sewer and drainage, while the second phase will also add a sanitary sewer pipe element.

Here are the Tweets from the meeting, few as they are:

Gazebo Planned for Murgia Park
Posted by Evan Brandt at 12:00 AM