THIS is Why Everyone HATES Harrisburg 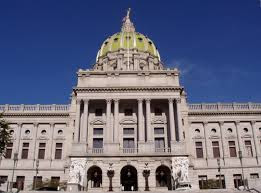 With sad predictability, the process of adopting a budget in Pennsylvania has devolved to the usual last-minute maneuvers, rushed half-baked proposals and political stunts that looks for all its chicanery like a cross between speed chess and Let’s Make a Deal.

The opening move, as it always is, belongs to the Governor when he proposed his budget in February.

That budget, if adopted unchanged, would have added $1 million to the coffers of Pottstown Public Schools.

Then comes the long staring contest in which, quite literally, nothing happens for months and months, all while business managers and school boards in Pennsylvania’s 500 school districts are scrying tea leaves trying to figure out where up to one-third of their budget revenues may end up.

Unlike his predecessor, Gov. Tom Wolf has made the most of the time, touring the Commonwealth with his wife and cabinet members, trying to drum up support for his budget and what it will do for public schools, the issue on which he won election.

On the other side of the divide, from February until the 11th hour, the Pennsylvania Legislature, the clown car branch of state government, did absolutely nothing.

Finally, noticing the ticking of the clock, they were spurred into action and responded to Wolf’s budget not by countering his proposals to work out a compromise, but by putting it up for a vote immediately where it was doomed to fail from day one.

Then, the games began.

During what passes for negotiation sessions in Harrisburg, Wolf’s chief negotiator, former DEP Secretary John Hangar, recognizing that the Republicans control both house of the Legislature,  went to the table with some concessions on Wolf’s proposal to tax natural gas drillers.

The GOP reaction, Hangar told the roomful of reporters to whom he rushed afterward, was to say “no.” Just No.

Surely, the $48.6 million those drillers have spent on lobbying those legislators – money that could have been spent on taxes to fund our schools -- had no impact on the legislators’ intractable position.

(By the way, we are the only state in the nation that does not tax Marcellus shale natural gas drillers who are, with depressing regularity, polluting the groundwater of the people unlucky enough to live nearby.)

Now, with just four days until the end of the fiscal year, the Republicans in the House and Senate release a budget which, they say, increases funding for education without raising taxes.

What they don’t say is that it is a 1.8 percent increase from the previous year; the fourth year in which millions had been drained from public school funding. Their budget does not restore those cuts, it simply makes them smaller.

Not included in the $100 million increase for basic education funding, are any increases for job training and education; teacher or professional development; adult and family literacy; career and technical education or early intervention for kids with learning difficulties.

The fact that in the most recent election, the state’s voters overwhelmingly said they wanted the guy who said he would tax gas drillers to provide more money to schools is irrelevant to the Legislature.

They want to teach Wolf a lesson, the same way they taught Gov. Corbett a lesson – a member of their party for God’s sake – “nothing happens without our say so.”

To them, largely immune from getting voted out of office by their own buffaloed constituents, this is all that matters

This weekend I came across a quote from James Madison that seems appropriate to inject here:


"Knowledge will forever govern ignorance: And a people who mean to be their own Governors, must arm themselves with the power which knowledge gives."

Substitute the word “education” for knowledge and you can see why it might be in the best interest of those in power to ensure the voters don’t have too much of it.

And when you consider that the Republican budget cuts $67,000 for voter registration and education, a 14.6 percent drop, it becomes clearer.

The fact that a cut that small represents 14 percent of voter registration efforts is itself a sad commentary on the value we put on educating people to vote.

Maybe that’s because voters might be upset if they knew that although the Republican budget plan cuts $4 million from budget for the governor’s office; it increases the General Assembly’s budget by 22.5 percent or a whopping $51.4 million.

The $31.3 million it adds to the Senate’s budget alone is an increase of nearly 50 percent, all this for a branch of government whose pile of spending money is already so huge that it could probably close half the state’s budget deficit by itself.

What this means, of course, is that Wolf will veto it, which will leave us at the start of the fiscal year with both branches of government having rejected the others’ budget plan.

This will likely be followed by another weeks-long, or months-long staring contest, with each branch accusing the other of everything from fiscal malfeasance to starving children.

Make no mistake, this will cost us money.

That’s because while this needless drama plays out, school districts will have to borrow money to cover the deficit created by the failure of our state’s leaders to fulfill their single most important responsibility – passing a Goddamn budget.

In case you were wondering Legislature (not that you care), but this is why everyone hates Harrisburg.