Another Lesson in Transparency

Sadly, no one took me up on my bet, made in this Nov. 30 post, that the school board was poised to appoint Jeff Sparagana as the district's new superintendent.

This means no extra money for Christmas presents at my house now that they did last night.

Although sad for what won't be under the tree, it's not really a surprise.

After all, people in Pottstown have become quite used to promotion from within.

Sparagana represents the fifth time in a row that the Pottstown School Board has chosen a superintendent from within its own administrative ranks.

Which, all in all, doesn't say much for my powers of prognostication.

But that's not really the point of today's post. It's not worth much to crow about predicting something everyone pretty much knew would happen anyway.

(Further, if any of you are pausing during the onslaught of the Mayan apocalypse to read this, you know my powers of foretelling are sadly lacking indeed.)

Besides, I like Jeff Sparagana and I think he'll do a pretty good job.

He has already put Pottstown on the map with its early education initiatives and is known state wide, if not nationally as an expert on the subject.

As a principal, he always ran a pretty tight ship and as the assistant superintendent, who has the unenviable responsibility of dealing with personnel issues, he's already proven himself in what is probably the most difficult part of being a leader in a large organization.

What we're here to talk about today is the dog and pony show which led up to Thursday night's expected but unannounced vote.

The ring leader of this performance is School Board President Judyth Zahora, who talks the talk but rarely walks the walk when it comes to public participation.

To be sure, other members of the school board bear a responsibility to speak up for the public's involvement as well, but they rarely object to the hypocrisy of decrying public apathy while repeatedly preventing public involvement.

Listen, it's understood that in a matter as delicate as hiring your chief administrator, some things have to remain private, but somehow, by some miracle of science, other districts seem to find ways to involve the public in ways Pottstown would never dream of.

They form citizen committees; or, (horrors!) allowing the public and staff to interview the final candidates.

Zahora said publicly that she wanted the public to be involved this time in the search for a new superintendent, that it was a big decision.

Zahora told the board at the Nov. 1 school board meeting that she would like public meetings the board would hold on the superintendent matter to be in the large group instruction room in the middle school where the board meets for regular meetings.

“I’d like the meetings to be here and I would hope we’d have a big crowd here and for these to be as public as possible,” Zahora said. “I’d like to believe we’ll have a large amount of public interest.”

Later in the evening, referring to the district’s use of electronic communication to keep in touch with families, Zahora said, “The more communication we have, the better for our staff, our students and our parents.”
That would be the talking the talk part of the equation. 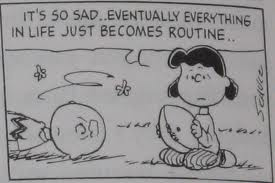 What happens when Lucy offers to hold the football for Charlie Brown?

First, the board held a closed-to-the-public executive session with Jerry W. Shiveley, the executive director and CEO of the Montgomery County Intermediate Unit on options it could consider in its search.

Why the public could not know these options remains a mystery Scobby Doo and the gang could not solve.

Then a set of several public meetings on how the board could proceed were tentatively scheduled.

None of them ever occurred and no explanation was ever offered.

Instead, suddenly, as so often happens with the Pottstown School Board, a decision emerged from nowhere and the public is left scratching its head, and subsequently chided by Mrs. Zahora for never attending public meetings.

I'll forgo going through the list of similar public-excluding actions taken by the board over the years. (I don't want Amy Francis yelling at me again on Facebook).

But if you're interested, they're outlined in this Nov. 4 article I wrote for The Mercury.

I would rail against constant contradiction, but I've done that before and, unlike so many things in Pottstown, I think I'll pass on doing the same thing over and over and expecting a different result.

Instead, I will resign myself to the Pottstown axiom  "that's the way we've always done it," to which I will ask why we wonder that things keep turning out the same way....