So I think it's fair to say, that I've been to my share of public meetings.

And I also think it's fair to say that I've been at meetings where audience members were "disgruntled."

But it's not often that I see a plain clothed police response used to deal with  a disgruntled audience member.

But that's what I saw Tuesday.

"Disgruntled" was the word Police Capt. Rick Drumheller used when I asked him why he had asked members of the police department's Community Response Unit to be at Tuesday's meeting.

“I thought there might be some disgruntled members of the audience,” Drumheller told me Tuesday when I asked why police were there.

But more I thought about that answer, the more questions it spawned.

The first one that sprang to mind was "since when does 'digruntled audience members' require a police presence?"

In more than 25 years of municipal reporting, I have seen borough council presidents, school board presidents, solicitors,township supervisors and managers of all stripes deal with irate members of the public without the need for police intervention.

It's in the job description.

Heck, in the Reporter's Handbook, "irate" and "audience member" are often listed as synonyms.

Let's face it, most people don't come to a municipal meeting, as thrilling as they are, unless they're pissed off about something.

On rare occasions, when an item on the agenda is controversial, I can understand it.

For example, I recall Rick Rabinowitz archly noting the presence of Lower Pottsgrove Police Officers at a Pottsgrove School Board meeting at which the "centers" approach to elementary education was to be voted upon.

It had been controversial for months, and some meetings had ended in shouting.

But what was on council's agenda Tuesday that was so controversial that plain clothes police officers were required to blend in to the audience, as Drumheller described it, to deal with .... what? A riot? Unlikely in the extreme.

The second thought that came to mind was that in addition to Flanders and Drumheller, I counted at least three and possible four police officers in the room.

There are only two possibilities. They were being paid, or they weren't.

If they weren't being paid -- which is unlikely when you consider their contract does not allow them to even work the Pottstown Halloween Parade without getting four hours overtime -- then, as Flanders explained during the parade debate, they were not authorized to use any police powers.

I suppose its possible they were just there for fun or out of civic curiosity and were asking the man trying to ask council a question to be quiet and sit down as fellow citizens ... but then since so few of our police officers live in our town they wouldn't really have standing as "residents." 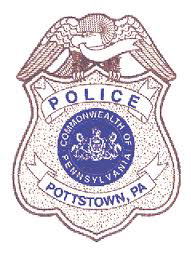 Which leads me to conclude they were being paid.

If so, I have to wonder if having three or four on-duty officers attend a public meeting at which the most crime that is likely to occur is overly boring political speeches, is a terribly good use of taxpayer resources.

Who was on the street? Was the borough council meeting the top crime priority in Pottstown Tuesday night?

Given that, at least until April when he resigns as chief, every single person in borough hall will answer to one man, I would certainly hope this display of police power is not going to become the norm.

Which brings us to my third thought, perhaps most important one in the long haul.

Much like the ham-handed Pottstown School Board, which complains about a lack of public involvement and yet shuts the public out of every issue in which it actually takes an interest, borough council has been heard to complain that it can't get volunteers for its boards, or interested residents at its meeting.

I would venture to say that the elderly gentleman, whose name I wish I knew, who stood up in the back of council meeting room Tuesday was an interested resident.

No where on the agenda or in the meeting room, does it indicate that if you want to address council, you must sign up to do it at the beginning of the meeting.

Those of us who have spent years at such meetings sometimes forget this.

Also, as an aside, I think that asking people to comment on items before its clear what's going to happen with them, is not really the best way to get the most insightful comments from your constituents.

Case in point, although we had reported several times in The Mercury that Flanders was likely to be appointed, Tuesday's agenda mentioned only a motion to name "an individual" as the new borough manager.

What's the rationale for secrecy? As Council President Stephen Toroney noted in his own carefully noted time line of events, Flanders was made an offer in early October. Not only did council know, but, apparently, the police force knew.

Why is the taxpaying public purposefully kept in the dark and, when it's finally clear what the vote will be, told it's too late to comment?

Which brings us right back to my third thought.

As a veteran audience member of countless council meetings, I frequently have witnessed Toroney ignore the rules he cleaved to Tuesday night, to allow people to address council out of turn.

And, as someone in the audience noted Tuesday night, council has the ability to vote to waive its own rules and could easily have allowed that gentleman to express his thoughts, or ask his question.

Any member of council could have made that motion and, as a privileged motion, it would have taken precedence and required an immediate vote.

It's a sad truth of Pottstown civics, and probably everywhere else too, that people don't pay attention until the last minute. But that does not release public officials from their responsibility to seek and bend over backwards to hear what their constituents have to say -- particularly in a public setting.

Certainly, council veterans like Toroney learned this long ago. And if, as they so often say, they want to hear what people think, that sometimes means listening when the people want to say it, not just when its convenient for council to hear it.

It was, to unearth an old cliche, the loss of a "teachable moment." As a teacher at the Western Center for Technical Studies, one would hope that Mr. Toroney would recognize and act upon such moments when they occur.

What possible conclusion could that man reach when he went home Tuesday night, but that council is more interested in its rules than his thoughts? Or, worse, that the rules are designed to prevent useful comment rather than to encourage it.

Why would he ever show up at another meeting to participate in his local government or, perhaps more worrisome, trust that the police will be interested in what he has to say should he require their services?

The incident, which I recorded on a video I have posted below, was also evidence that, if only because it was inconvenient, council was not interested in allowing or hearing more public comment on their decision to appoint Flanders.

I just hope the police weren't there for the same reason.