For the first time since it dissolved the Shade Tree Commission, Pottstown Borough Council is faced with an appeal by a resident who was denied a permit to take down a tree she considers dangerous.

Janice Monger of 5 W. Second St. made her case on behalf of her neighbor at 3 W. Second St., who has actual legal responsibility for the pear tree in front of her property. It is located at the northwest corner of the intersection with Johnston Street.

Monger applied for a permit to take the tree down and was denied. She appealed and was again denied by the body set up to hear such appeals -- the borough manager, public works director and councilman who represents the ward in which the tree is located.

(She complained to council that the meeting at which she was supposed to make her case was cancelled, but her appeal was denied anyway.)

Under the new ordinance, her final appeal goes to a full meeting of borough council, which occurred during Wednesday's work session.

Monger told council that a similar tree across the street lost a branch that fell on a pick-up truck occupied by a man and his infant son. Luckily, neither was hurt although there was damage to the truck.

But it has made Monger fearful of what the tree in front of her neighbor's house might do.

"My neighbors and I live in fear," she said. "I have to tell my family not to park in front of our house. I like trees, but humans are more important than trees," Monger told council.

Monger said her neighbor cannot afford the cost of taking the tree down so Monger offered to undertake the job for her.

But when she applied for the permit, it was denied by Public Works Director Doug Yerger.

Yerger told council it is a healthy tree and has caused no damage to the sidewalk and, under the terms of the ordinance, the tree does not meet the conditions which allow for it to be taken down.

But Monger, a 38-year resident of Pottstown, said the species itself is inherently dangerous. "I did some research on the Internet," she said. "And I found these trees have a very short lifespan of 25 years and these trees are at least 30 years old."

Furthermore, she said, "after 15 years they start to crack and the branches get large and heavy. There are two that are cracked on Second Street."

She said Penn State arborists do not recommend the species as a street tree.

Allentown and Emmaus have both removed all their Bradford pears for that reason, Monger said, adding that this particular tree has also grown up into the power lines in front of her house.

But while Allentown and Emmaus may have eliminated their pear trees, New York City, which has the East Coast's largest urban forest, has continued to plant them.

A 2005 survey of that city's trees showed that of the 93,000 street trees planted in the previous 10 years, callery pear's were the fourth most numerous.

But given the choice to do it over again, Yerger said he would probably not plant pear trees in Pottstown.

"There's no question it's a problem tree and we have a lot of them," Yerger said.

Council Vice President Jeff Chomnuk, who represents the ward where the tree in question is located, is opposed to its removal.

"I travel that street every day, and I know that tree pretty well," Chomnuk said.

He suggested that Monger's concerns could be address by trimming the tree, "which would be half the cost and could eliminate the branch you're worried about." 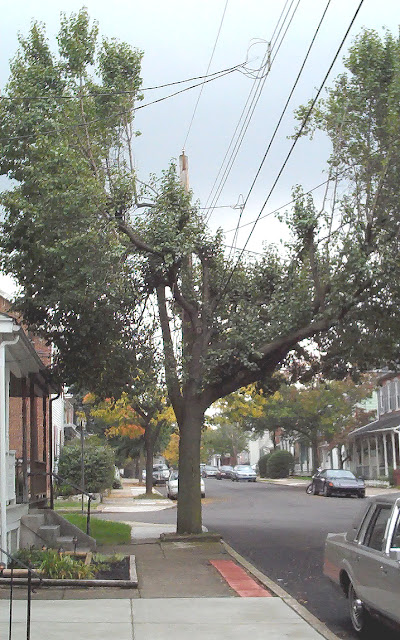 "I'm not trying to minimize your concern, but it's a healthy tree," Chomnuk said.

Council President Stephen Toroney said he wanted an expert opinion before making a decision. "None of us up here are experts and we're not in the business of taking trees down."

He suggested that Monger get the contractor she intended to hire to take the tree down to give an opinion on the tree's stability.

However Mayor Bonnie Heath noted that given the contractor's interest in making more money by advising that the tree come down, that opinion should be considered carefully.

Toroney also indicated said he might be more inclined to allow the removal if a new tree would be planted to replaced it.

However, Yerger said the tree's proximity to a newly installed handicapped sidewalk ramp makes re-planting problematic under the new planting guidelines, which call for a certain distance from such ramps, as well as water and sewer lines.

Gibson expressed concerns about the borough's liability, although Borough Solicitor Charles D. Garner Jr. advised that "negligence" on the borough's part would have to be proven for that to be a problem.

Kirkland, Weand and Gery all agreed that since Monger had produced information indicating pear trees of that age are prone to cracking and losing branches, that it is enough to allow the tree's removal under the provision of the ordinance that allows the removal of trees the borough finds to be "dangerous."

"I don't believe our ordinance makes it necessary to wait until it falls on somebody to be considered dangerous," Gery said.

Garner conceded that because the ordinance does not specifically define "dangerous," that the only definition that applies "is the one in the dictionary."

"We're looking at a responsible property owner," said Weand. "And we have a similar tree that failed across the street and we have residents who feel endangered by the preservation of that tree."

However Heath warned that setting a precedent of allowing tree removal permits based solely on a tree's species "would have other people being allowed to cut down trees all over town willy nilly."

"Those trees," she said, "were put in to provide shade and to beautify our town. Have you ever seen a street where all the trees have been removed? It's not a pretty sight."

Council has scheduled a vote on the matter for its meeting Tuesday night.