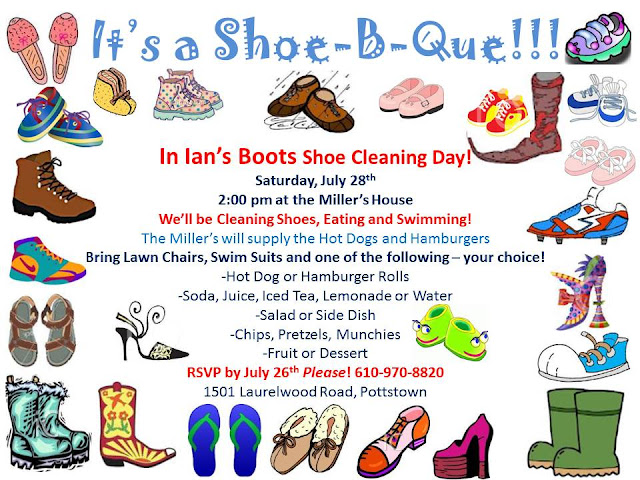 Why just barbecue, when you can barbecue for a good cause?

This Saturday, at 2 p.m. Holly Wastler-Miller and her husband Ron will host however many people choose to show up and help clean as many as 5,000 pairs of shoes for the needy.

Anyone coming is invited to bring lawn chairs, swim suits and one of the food items listed above.

The shoes will be donated to the needy through the Miller's organization, In Ian's Boots.

"In Ian's Boots," as you may recall from my March 23rd and April 18th posts, is a non-profit organization.

Wastler-Miller said they are still waiting for word on how much was raised.

In the meantime, they have more than 5,000 shoes to clean.

"We need all the hands we can get," Miller said.

Miller and her husband founded the organization as the result of the death of their 12-year-old son, Ian Miller, who was killed in a sledding accident in January 2010.

Rescue workers trying to revive Ian after his sled hit a ski lift tower while on a Scout trip Jan. 16, 2010 found a slip of paper in his boot.

On the paper was a passage from The Bible, James 1:2-4, which reads: “Consider it pure joy, my brothers, whenever you face trials of many kinds, because you know that the testing of your faith develops perseverance. Perseverance must finish its work so that you may be mature and complete, not lacking anything.”

That passage inspired them to form In Ian's Boots and they haven't looked back since.