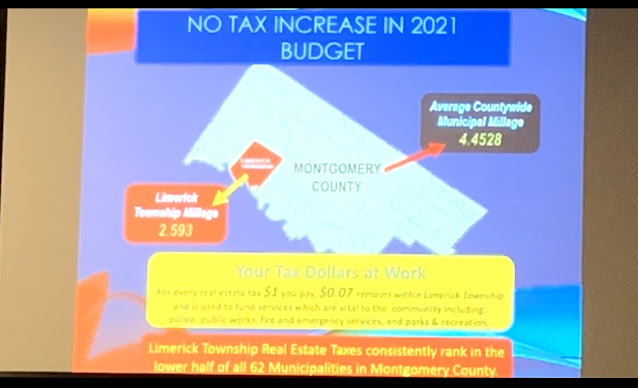 For the fifth consecutive year, there is no property tax hike proposed in 2021 in the Limerick Township budget.

For weeks, the township supervisors have been reviewing different portions of the budget organized by Assistant Township Manager Beth DiPrete.

Tuesday night, the board voted unanimously (chairman Thomas Neafcy was absent) to advertise the $22,269,299 budget.

Under the proposed spending plan, the millage will remain at 2.593 mills.

A tax hike was avoided by drawing $712,645 from reserves, but DiPrete told the supervisors the administration hopes to recoup most of that money from unbudgeted revenues.

"We've been very conservative with our estimates," she said.

Limerick also has a very sizeable cushion to fall back on -- $6.9 million much of which came from the 2018 sale of its sewer system.

More than $12 million of the $75 million proceeds of the sale went into major building projects such as the new township building, the new township garage and the new fire station in Limerick.

Much of the rest is in the township's capital fund to pay for future projects.

The supervisors will vote next month on the final budget after the public has had a chance to review it.